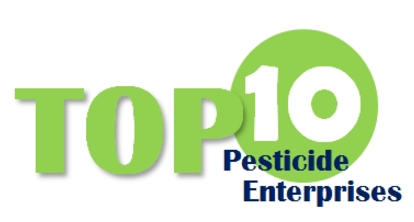 The China Crop Protection Industry Association (CCPIA) has recently revealed a list of China’s top 100 pesticides technical companies, based on their sales volume in the year 2016. The participation in the survey was voluntary, so not every pesticide firm in China is included in the list.

According to market intelligence firm CCM, the total sales volume of the top 100 Chinese pesticides enterprises has reached USD16.55 billion in 2016. It is notable, that this revenue shows a decline from 2015 to 2016 by 0.77%. However, looking at the revenue of the top 10 pesticides manufacturers in China, the number reached USD4.82 billion in 2016, which represents an increase of almost 4%. Hence, China’s top manufacturers are developing better than the majority of the pesticides industry in general.

Nutrichem is in the first rank on the list, revealing a sales volume from pesticides in 2016 by USD685 million. This number represents a year on year increase by 28%. Shandong Weifang Rainbow could climb from the fifth rank in 2016 to the second rank in 2017. The company achieved a pesticides revenue of USD565 million in 2016, which is an increase of 20.8% to 2015.

The order of the top pesticides enterprises in China has changed from 2015 to 2016. In 2016, Nanjing Redsun was the first rank with about USD569 million of sales, which represented a year on year decrease by 1.47%. The company was followed by Zhejiang Wynca Chemical and Beijing Nutrichem, which reported an annual sales volume of USD546 million and USD535 million respectively in 2015. The sales of Zhejiang Wynca dropped by 11.86%, while Nutrichem even published a downtrend of 12.06% YoY.

Lianyungang Liben Agro-chemical is the newcomer in the list on the highest rank. The company is listed on the 12th rank with a revenue in 2016 of USD296 million. Other new companies on the list are Jiangsu Agrochem Laboratory, Hubei Xianlong Chemical, and Guangxi Yiduoshou Biotechnology, among others. 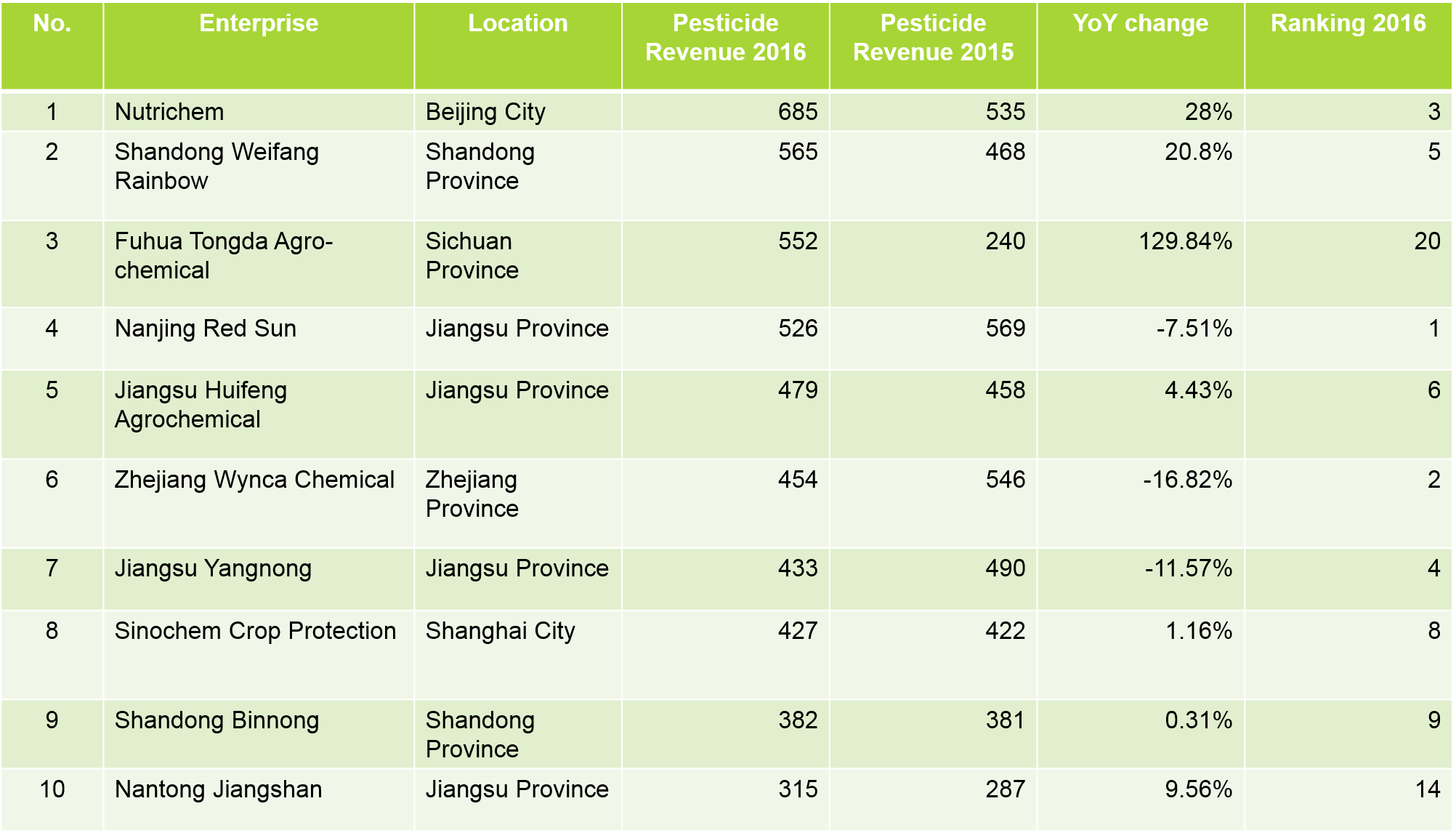 According to CCM, the structure of the pesticide production in China, which involves the output of herbicides has been accounting for about 50% of the total output of pesticides in recent years, most of the top 30 enterprises on the 2017 list have herbicide businesses, and many of them are mainly engaged in herbicide production.

According to CCM, in 2016, China’s total output of pesticide technical reached about 3.78 million tonnes, a small increase compared to 2015. Notably, in the past five years, it has been growing at an average year on year growth rate of 1.57%. Thereinto, the output of herbicides was 1.77 million tonnes, accounting for 46.93% of the total in 2016.

About the top manufacturers

Most of its revenues come from pesticide intermediates, technical and formulations, as well as GLP registration services. Notably, The company topped the 2015 Top 20 Chinese Pesticide Exporters List released by the China Council for the Promotion and of International Trade Subcouncil of Chemical Industry and reached second place in the Top 20 pesticide enterprises in 2017 list by revenue growth with a revenue growth of USD150 million.

What’s more, CCM has also researched the main pesticide products of the top pesticides producers in China. As a result, it revealed that the main products of Nutrichem have been metolachlor, acetochlor, tebuconazole, oxyfluorfen, tebuthiuron, and picloram.

In recent years, Weifang Rainbow has been increasing investments in insecticides and fungicides, while in the past, it focused on the development of herbicides. Meanwhile, Weifang Rainbow will benefit from 1,000 t/a highly efficient fungicide technical project of Qingdao Runnong, one of its subsidiaries, and further, see its fungicide business improved and competitiveness strengthened.

The company ranked third in the 2017 list of top enterprises by revenue growth, able to show a growth of USD97 million in 2016.

Fuhua Tongda is the largest glyphosate producer in China and gets the biggest sales share from this production. The company, established in Leshan City (Sichuan Province) in Dec. 2007, is specialised in R&D, production and sales of glyphosate and related chemicals. The company's number of staff is over 1,200.

Fuhua Tongda was able to achieve the first rank in the 2017 list of top enterprises by revenue growth, stating a revenue growth of USD312 million USD.

The report contains the analysis of China's pesticides industry in 2016 as well as an in-dept analysis on the top enterprises, including geographic distribution, industrial concentration and reasons in growth and decline of enterprises' revenue.

Make use of our special offer and get 20% discount when ordering the report online.

Do you want to find out more about the pesticides market in China? Try our Newsletters and Industrial Reports or join our professional online platform today and get insights in Reports, Newsletter, and Market Data at one place.

For more trade information of pesticides, including Import and Export analysis as well as Manufacturer to Buyer Tracking, contact our experts in trade analysis to get your answers today.