China’s TiO2 exports were booming in 2016. The continuously depreciating RMB and the increasing export scales of China’s manufacturers have strengthened this development throughout the year. As a fact, many of China’s producers exported their products with a lower price while achieving higher profit margins in the domestic market of TiO2. Tranalysis, a trade analysis provider, now reveals the top 10 Chinese TiO2 exporters of the year 2016 with the original data of China Customs.

The year 2016 had shown a strong rebound of China’s TiO2 business in general, according to market intelligence firm CCM. The market situation in 2015 was quite depressed, while in 2016 huge price rises have benefited the financial performance of China’s manufacturers.

The overseas demand for Chinese TiO2 rose up by about 17% in 2016, which enabled an export increase of the manufacturers in China. As a fact, Chinese TiO2 is highly demanded in overseas markets, due to the comparable small price of the suppliers. The export of TiO2 is responsible for about one-third of the total output in China. 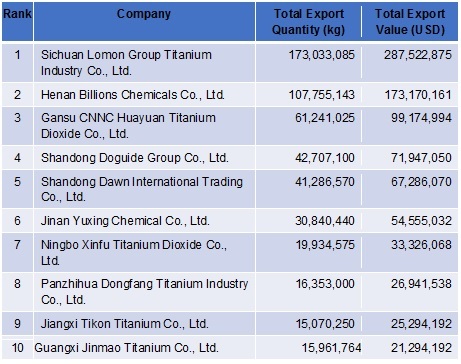 The leading Chinese TiO2 exporter in value and quantity has been Sichuan Lomon, followed by Henan Billions and Gansu CNNC Huayuan. However, Sichuan Lomon exported a value of titanium dioxide by USD100,000,000 more than the second rank Henan Billions. Henan Billions, on the other hand, exported over USD70,000,000 more TiO2 than Gansu CNNC Huayuan. This demonstrates the huge monopole-like position of the newly merged company Henan Lomon, which can determine the market development for TiO2 in China nearly all alone.

Adjustment of Tariff Rates in 2017

New adjustments have been announced for tariff rates, which will benefit the chemical industry in China in particular, due to decreased import and export tariffs for several chemicals. The export tariff for ilmenite will stay unchanged by 10% and the rate for ferrotitanium decreased by 5% down to 20%.

As a result, tariffs for titanium products are remaining similar to the ones in 2016, which will not cause bigger price fluctuations and keep a stable market.

According to CCM, many enterprises, which belong to the top exporting producers of TiO2 in China, will speed up their efforts to go public. Reasons are the strong rebound of the TiO2 market in China as well as the positive view on 2017.

Dawn Polymer Material, a brother company of Dawn Titanium, has successfully applied for an Initial Public Offerings (IPO), which has started rumours about Dawn Titanium is also about to apply for the IPO.

China’s government is working on its plan to eliminate outmoded capacities of TiO2 and strengthen environmental protection measurements. Small and middle-sized enterprises, with a production capacity under 50,000t/a, are the ones to suffer. They mostly get merged or need to withdraw from the market. Without their production capacity of about 500,000 tonnes yearly, the domestic output might shrink about 20%. This will enhance the power of listed companies in China immensely, which is one of the main reasons for the effort to go public.

Do you want to find out more about the chemicals market in China? Join our professional online platform today and get insights in Reports, Newsletter, and Market Data at one place. For more trade information on TiO2 visit our experts in trade analysis to get your answers today.

Looking for a convenient way to get comprehensive and actual information as well as a platform to discuss with peers about the latest chemicals industry and market trends? Simply subscribe to our YouTube Channel and join our group on LinkedIn.